Diwan Todar Mall was a wealthy Hindu merchant of Sirhind, who on the 13 December 1705 performed the cremation of the three martyred bodies of the two younger sons of Guru Gobind Singh, Zorawar Singh aged about 6, Fateh Singh aged about 9 and their grandmother, Mata Gujari.

This incident occurred after the Sahibzade had been executed by the Mughal authorities on the 12 December 1705 for not renouncing their faith and the death from shock of their grandmother at the news of the sudden and despicable execution of the innocent youngsters. This wealthy merchant had to cover the required ground for cremation with gold coins to get the release of the three bodies.

The compassionate Sikh trader of Sirhind, according to tradition, performed the last rites for the two younger sons of Guru Gobind Singh martyred on the orders of Wazir Khan, faujdar of Sirhind, and of Mata Gujari, the Guru’s mother. It is said that landowners around the Sirhind Fort would not permit him to hold the cremation in their fields, until one Chaudhari Atta agreed to sell him a plot.

The administrator’s stipulation was that the buyer (Todar Mall) will take only as much of the space as he could cover with gold mohars (gold coins), that he would lay out for the purchase. The diwan produced the coins and bought the piece of land he needed for the cremation. It is estimated (see below) that at least 7,800 gold coins were required to buy the required land.

History tells us the Seth ji raised the required number of coins and that he cremated the three bodies and putting the ashes in an urn which he buried in the land he had bought. The site is now marked by Gurdwara Jyoti Saroop at Fatehgarh Sahib, near Sirhind. 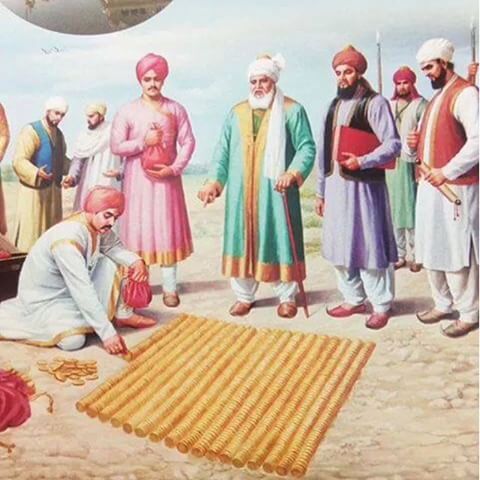 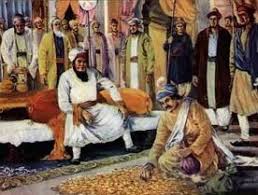